Strata Testing Services offer a comprehensive range of geomechanical testing of rock samples for the mining and engineering industries. 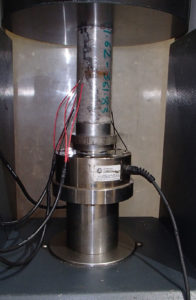 Uniaxial compressive strength testing (UCS) is a large part of our work load. To deal with the demand Strata Testing has recently invested in a new closed loop, load controlled testing machines to further increase the output and accuracy of its results.
– UCS strength testing with Young’s Modulus and Poison’s Ratio deformation.
– Strain gauges are bonded to samples and soldered to data logging equipment.
– A custom built Linear Variable Differential Transducer (LVDT) setup can be used for samples that are not suitable for instrumentation (use of strain gauges)
– Cyclic loading can be performed if required. 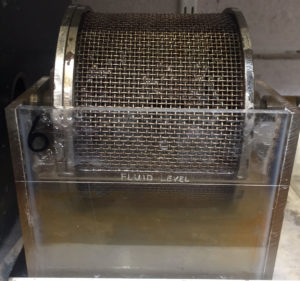 An accelerated weathering test that measures the resistance of a rock sample to weakening and disintegration resulting from two cycle of wetting and drying. It also incorporates abrasion by an inundated tumbling action.

A quick indirect measurement of tensile strength available and able to be performed on specimens ½ the length of the diameter. Tested as a group of 5 specimens where available, with an average being reported. 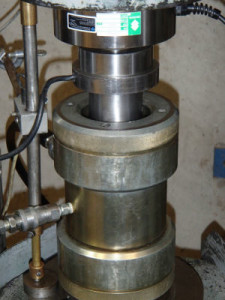 For the past 20 years Strata Testing has been preforming multi stage triaxial tests on rock core samples in Hoek cell setups. A considerable amount of effort and time has been spent with mining engineering clients to develop and perfect a report and test setup that helps determine the essential triaxial properties.
– Triaxials are tested in a Hoek Cell with confining pressures up to 16Mpa and are controlled by a digital pressure controller.
– Single stage triaxials with or without unloading cycles
– Multistage Triaxials 3 stages of confining pressures (With capacity to preform 5 stages when requested by client)
– 4 Hoek Cell sizes include: 45mm, 52mm, 62mm and 83mm
– If samples are larger than 83mm Strata Testing Services has in house sub coring facilities to suit testing setups. 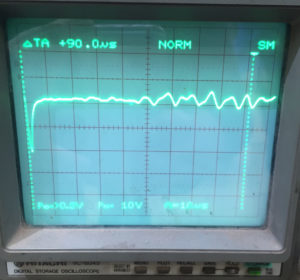 Measuring the velocity of sound through a specimen before other strength tests such as UCS or triaxial allows for correlation with downhole data collected during the drilling and sample selection stage. P wave velocity or transient time is reported.
– Testing with a nominal or specified normal load on all sample sizes.
– Testing with normal and confinement up to 16 MPa is available on HQ size core (61mm diameter)
– Single and multi stage testing available.

Testing the water permeability of HQ core using a pressure of up to 1 MPa.

This test is intended to measure the fracture toughness of rock materials. The main use of this property is for the classification and characterization of intact rock with respect to its resistance to crack propagation. Other important uses are either as an index for rock fragmentation processes such as crushing and tunnel boring, or in the analysis of hydraulic or explosive fracturing and stability. 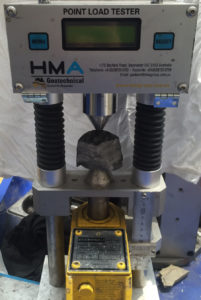 Generally intended as a simple field test for strength classification. Normally performed in conjunction with UCS testing.
– Axial and diametral tests on core or separate tests on irregular lumps. 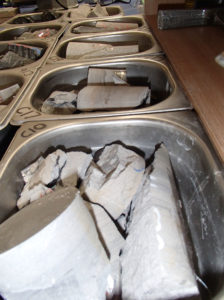 A sample that requires moisture content is weighed to 2 decimal places and placed in an oven set to 108c overnight. It is then weighed after drying and the difference is recorded, a second dry weight is taken an hour later to check for consistency. Moisture content may still be taken after most tests are performed.

As the majority of rock testing can only be done on a standardized sample we also offer a rock coring service. A block of sample is locked into place with a vice and cored to standard using a drill.